We are pleased to announce that Resident Partner Ms Aysha Mutaywea has recently been admitted as an arbitrator at the Courts of Sports Arbitration (CAS), making her the first Bahraini National to be included on the panel of arbitrators.

CAS, an arbitral institution based in Lausanne, Switzerland, facilitates the settlement of sports-related disputes through arbitration or mediation by means of procedural rules adapted to the specific needs of the sports industry.

On this occasion, the First Deputy Chairman of the Supreme Council for Youth and Sport, Chairman of the General Authority and President of the Bahrain Olympics Committee, HH Shaikh Khalid bin Hamad Al Khalifa, received Ms. Mutaywea following her appointment as an arbitrator at the CAS.  HH Shaikh Khalid expressed pride in Bahrain’s national competencies in various fields who have proved their excellence on an international level.

Our Resident Partner will be speaking at GAR Live: Abu Dhabi 2022

The G.C.C Commercial Arbitration Centre Recognises Resident Partner on Contribution to the Arbitration Scene in Bahrain and the GCC *Dissertation on Enforcement of Awards in Bahrain* 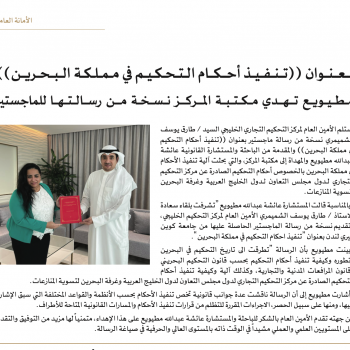